A Taste of Italy

Before we dive into Italy, Switzerland didn’t come to a complete close. After a last minute decision to visit Chamonix in France for 4 days, Dan and Rach went on different paths for the first time in 11 months. Dan was signed up for a Vipassana (strict 10 day silent meditation retreat) in Switzerland while Rach was accepted to a Workaway volunteering her time at a boutique hotel in the Italian Alps. Our time apart were hard, peaceful, rewarding, longing, rejuvenating, and absolutely necessary. We’ve coined our 1 year travel as “relationship bootcamp” as being around each other 24⁄7 for 11 months can be trying, however, the fruit the tree bears is plentiful. The cliche of ‘absence makes the heart grow fonder’ holds genuine truth. Above that, our individual experiences taught us valuable lessons to bring back to each other as a means to strengthen us together. 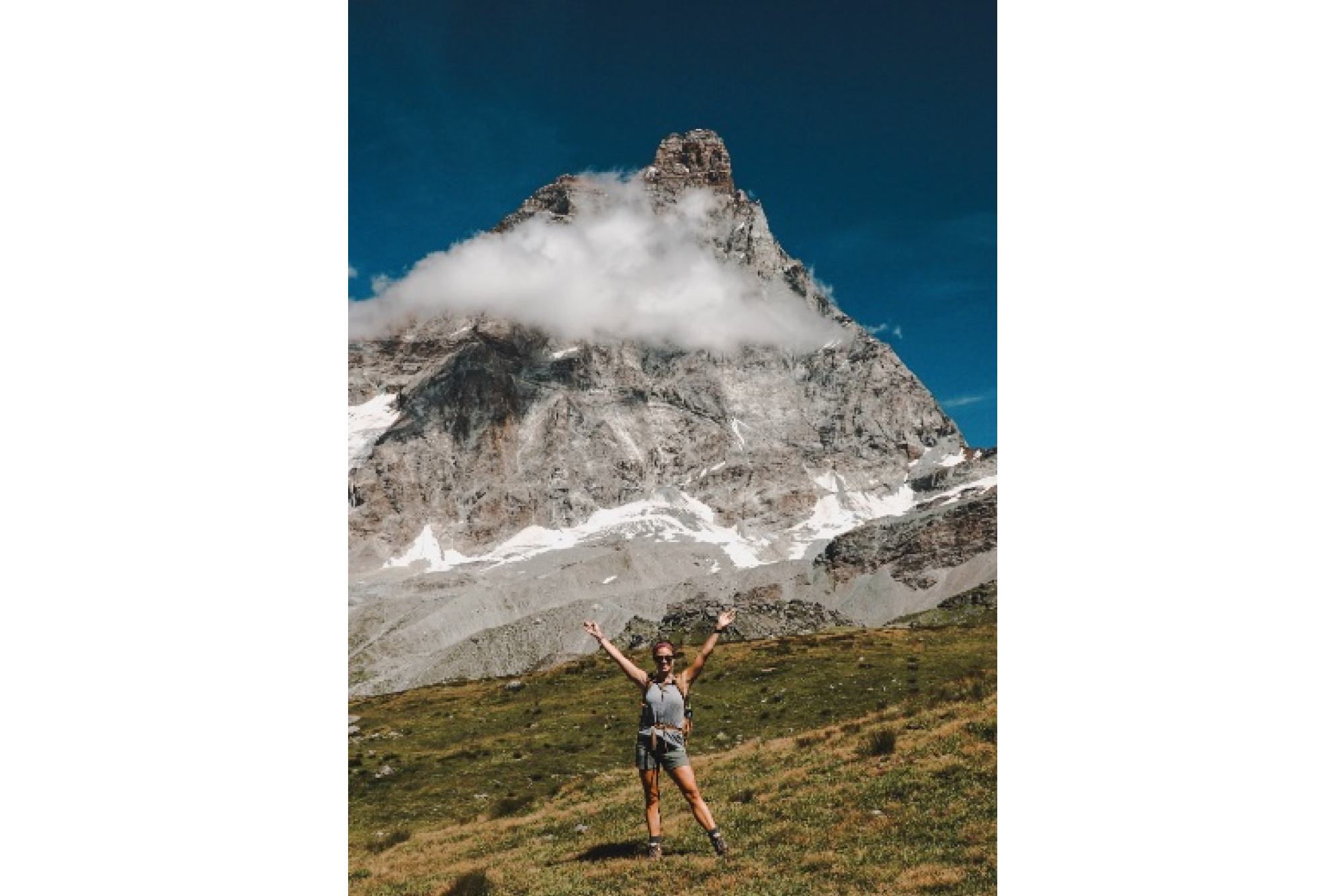 After Dan’s vipassana in Switzerland, he hitched a ride to meet Rachael in Aosta valley. Rach worked the dinner shift which gave her ample time to hike during the day. She schmoozed with Italian, Spanish, Swedish, and Polish guests in an incredibly beautiful place and hotel. By the time Dan arrived, Rach was done with her shifts. We spent an early morning the day after to ride glaciated peaks in Cervania ski resort on some DPS skis (as Dan says, the cream of the crop when it comes to skis), which Rach had full use of for free thanks to the hotel which was also an alpine events lodge. 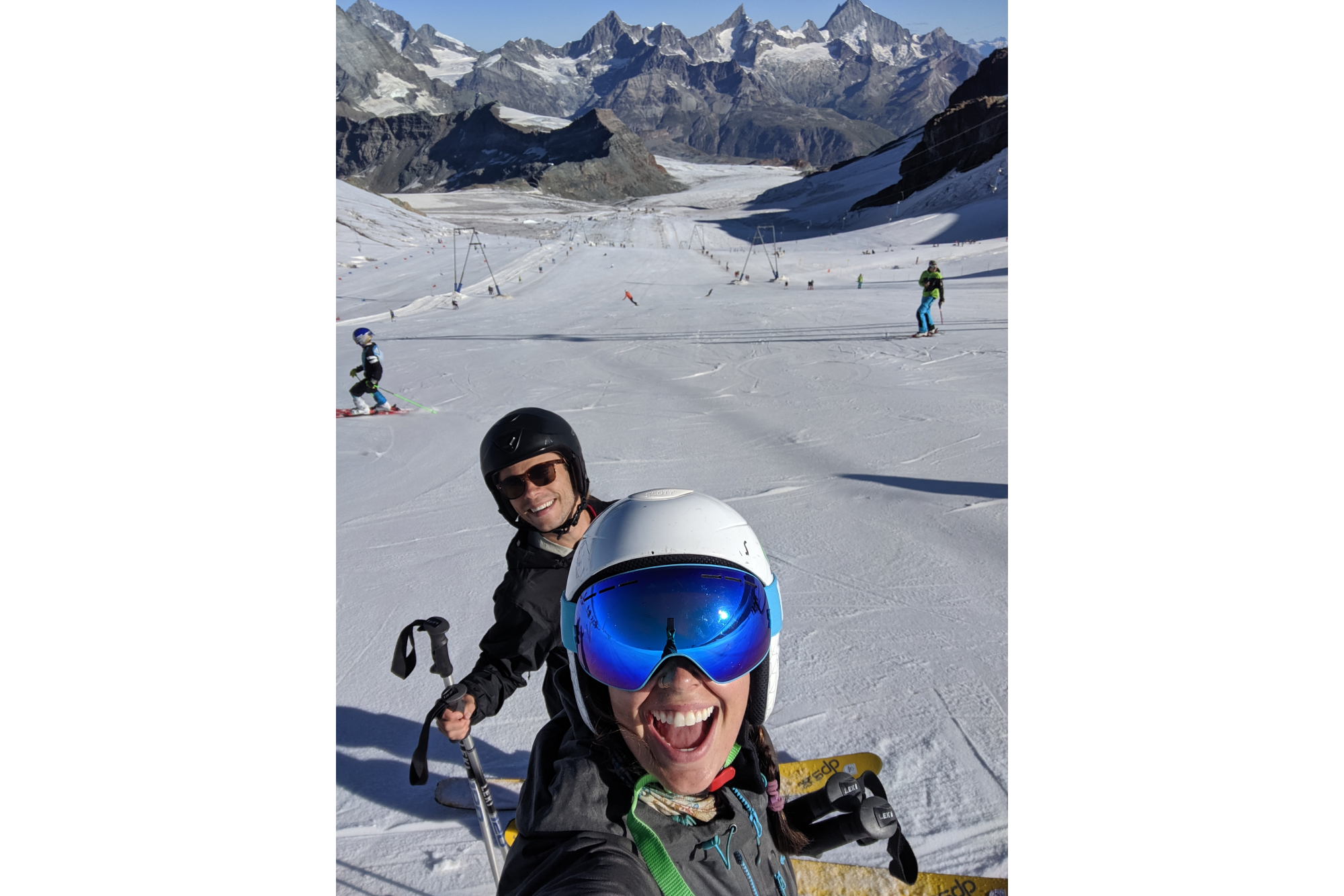 We had only a short morning ride. Rach took the the slopes like a champ while Dan played ski instructor. The ride up to the glaciated ski runs involved 3 gondolas and a tram totaling over 45 minutes to reach the top, thus our time skiing was only 4 complete runs. We barely made it back in time to catch our bus to Torino. Another country, another travel adventure.

Torino is not a popular tourist destination. The only reason we spent time here was for a bit of nostalgia. Dan studied abroad in Torino in 2006 during the Winter Olympics. A baby of 19 years old at the time, living in a country where he could freely consume alcohol legally. A mix of college child-like behavior and alcohol made for a hazy memory when returning to Torino. Nevertheless, Dan had his moments. From the apartment he lived in to the pubs he crawled to, Torino was a walk down memory lane. Torino and the rest of Italy was a short trip. Our time spent in Spain, Portugal, and Switzerland took a majority of our days available on the Schengen Visa - which really took us a while to figure out the system. We wanted to end our European escapades with 5 days in Prague (which is a part of the Schengen zone) thus our time spent in Italy was a mere 7 days total.

A Stop in Cinque Terre 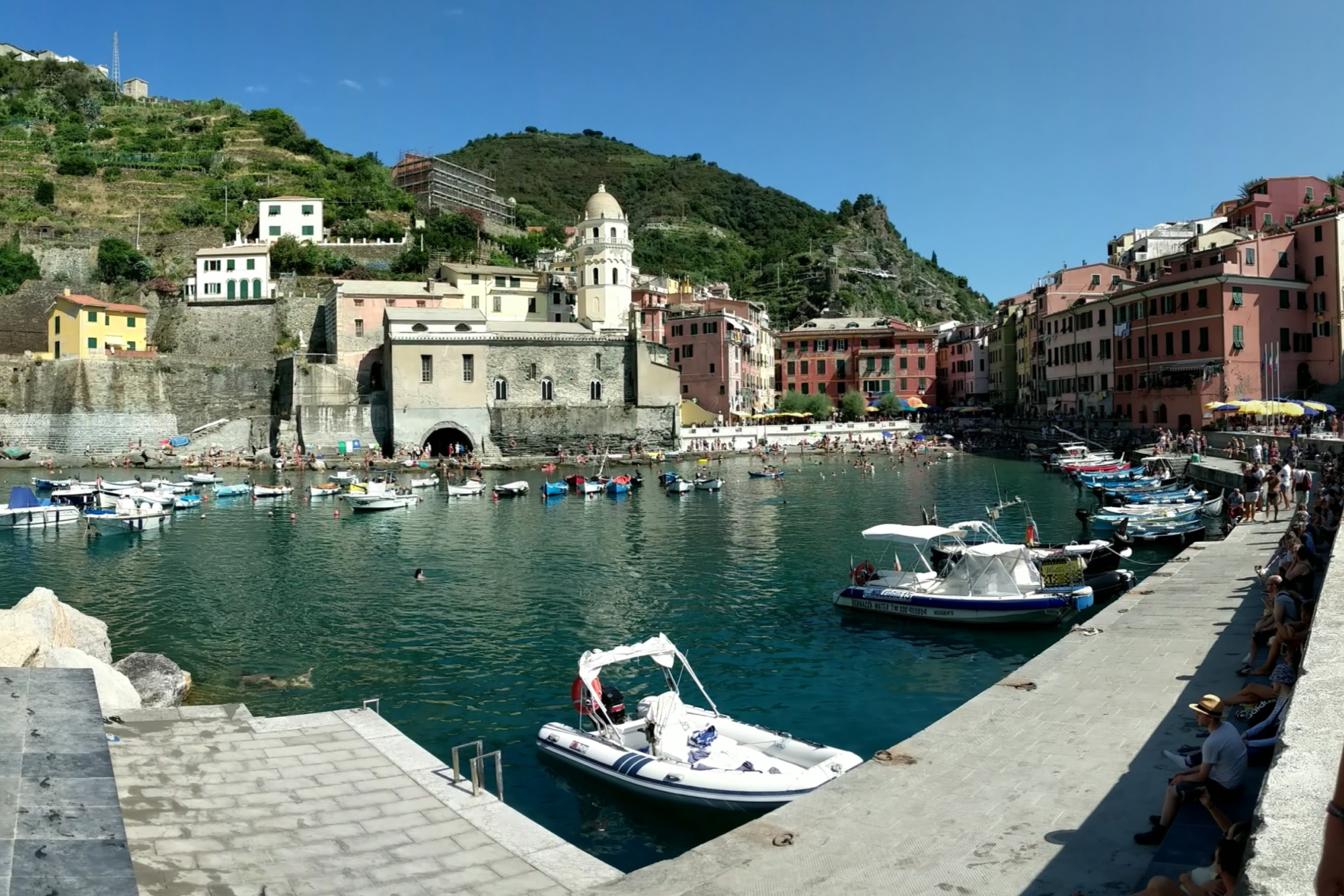 We boarded a train to Grosseto and noticed the train’s path went directly through Cinque Terre, one of the more beautiful northern coasts of Italy. We decided to take a lunch break in Vernazza, one of the smaller towns apart of Cinque Terre. Unfortunately, Italy was on national holiday called Ferragosto. For us this meant Torino was much quieter and nice to walk through, passing many closed shops. We were warned by some Italian friends that it would be dead in the city. They were right. All of Italy seemed to be in Cinque Terre and our short 2 hour break in Vernazza involved squeezing through crowds, buying expensive pizzas, sipping the must try Sciacchetra wine (only available in the Cinque Terre area!) and taking selfies while everyone else was taking selfies.

This also made for the delayed trains. We had to change 2 more trains between Vernazza and Grosseto. Our train in Vernazza was over 45 minutes late and our connecting train was only a 30 minute layover in Pisa. We thought we were going to miss our connecting train but, I guess the trains are normally late in Italy as our train in Pisa was just about to take off when we arrived. In a hilarious and selfish move by us, we heard the train whistle go off for our train from Pisa to Grosseto and jumped on the first car we could. With our giant bags on our backs and our day bags on our bellys, sweaty and smelly, we took a step on to the train and all we hear is unison Italians saying, “oh no no no” and a bunch of other words in Italian to us that were probably cuss words. All Dan did was respond “oh yes yes yes”, we were not about to miss our next train. People reluctantly moved aside as we squeezed on this cramped, standing only sweat box with Italians muttering under their breath… 4 hours later, we arrived. What a shit show.

While Grosseto was a perfect place to visit due to its tranquil beauty, history, and lesser known tourist destination, that wasn’t our reason for visiting. We’ve met some of the most amazing people while traveling. While touring Thailand, we were on the same holiday path as our friends Sheida and Paul. We first met them taking care of elephants in Chiang Mai, then again living up the beach life in Tonsai, and finally celebrating Songkran on Koh Tao. All of which were unplanned meetups. It just happens this way when you travel, and we love it! They welcomed us to Grosseto with loving open arms, as the good people they are. They are a great example for why we like to travel; to meet incredible people from around the world.

Our time was spent touring Grosseto, sharing stories, heading to Sheida and Paul’s favorite beach spot, and visiting the old Roman coastal town Castiglione della Pescaia. Sheida, an expat from Iran, and Paul, an expat from Ireland, are a unique pair. Both deciding to leave their home countries for different reasons and decided to settle in Rome where they met. Wanting to get out of the crazy city of Rome, they chose Grosseto to settle down and get married. Now, they live an interesting life as business partners growing a football (aka Soccer for all you Americans) management company.

We loved our time spent with Sheida and Paul as well as the humble town of Grosseto and the surrounding villages. We realized the little towns of Italy are far more enjoyable than the big cities as we ventured to Rome on our way to the airport. We spent a total of 5 hours in Rome and were ready to leave after 4 hours roaming Rome. The heat, the countless tourists, the overpriced trinkets and food, we enjoyed touring the highlights Rome has to offer, but had enough of the business Rome. The ruins of the Colosseum, Trivi Fountain, and Pantheon are all incredible to view but if all you are doing is snaking around tourists and tourist groups, the enjoyment becomes tainted, as it can be in any large touristic city. 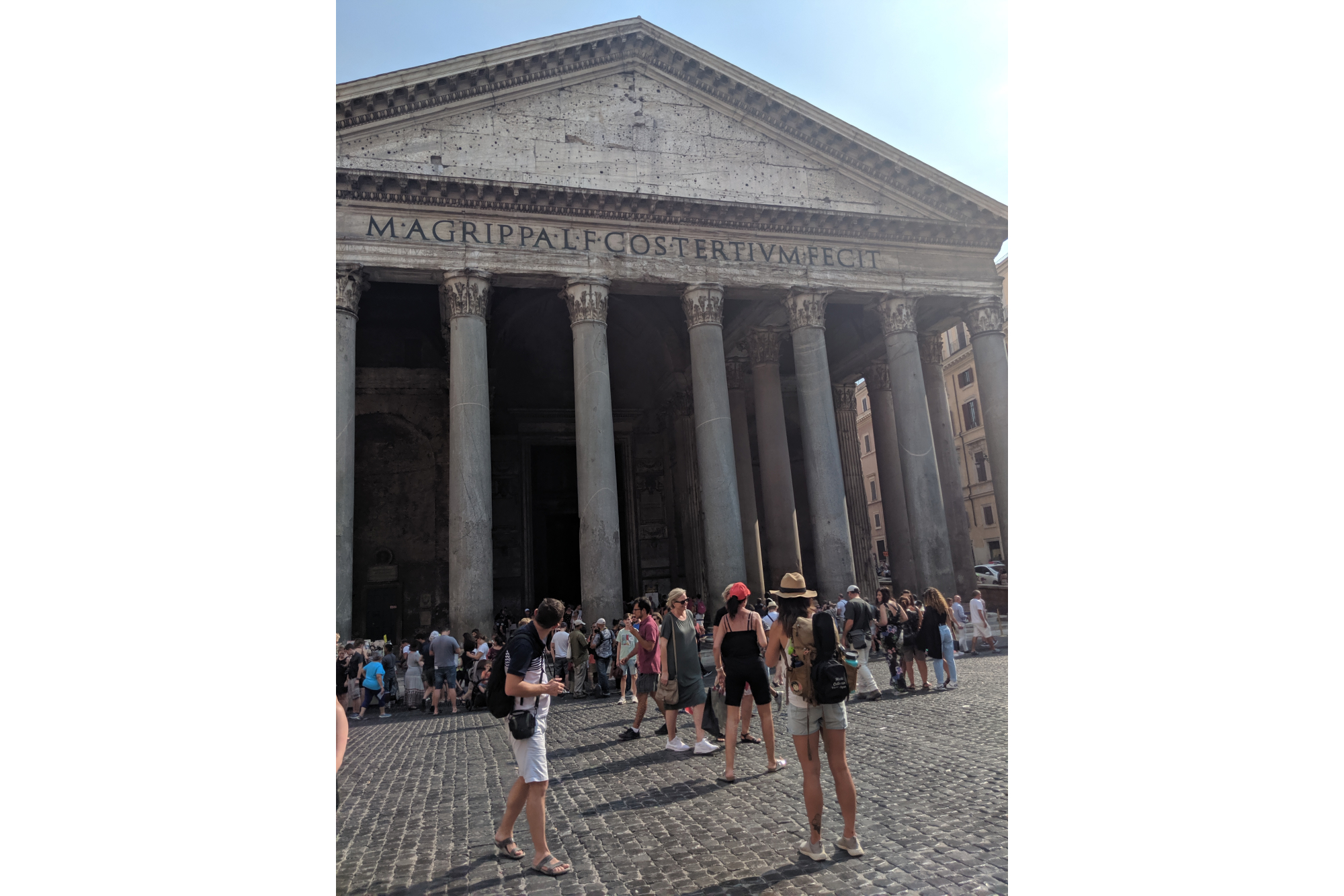 Our short trip to Rome led to a long, miserable overnight in the FCO airport. We have access to airport lounges but unfortunately the ones we had access to were past security and could not check in till 3 hours before our flight (which boarded at 5am the following day). Our night was spent trying to find comfortable corners to sleep in under less fluorescent lights and avoiding sketchy looking gypsies, who apparently have a reputation at the airport. Dan managed to sleep on a lime green bench cuddled, ironically, next to a couple of gypsy ladies. Rach got a cat nap in, but could not handle the fluorescent lights, even under an eye mask, and the constant drone of the shop alarm that had been wailing the whole time we were there. Not to mention the family of 10 who slowly encroached on Rach’s sleeping space (Dan was much more assertive in protecting his). Eventually, Rach gave up and gave her space to a teenage girl. The night was then spent walking in circles around the area and talking to her sister on the phone. The FCO airport is not convenient for early morning flights. If we chose to stay in a hotel, it would have cost 35-40 Euro and we would have had to hire a private taxi to get to the airport. Best option for our budget, be miserable and try to sleep in the airport.

The misery incurred was not in vein. Our next destination was Split and Stari Grad on Hvar Island in Croatia. A story you’ll just have to wait for.

Until next time,
With love,
~Dan and Rach 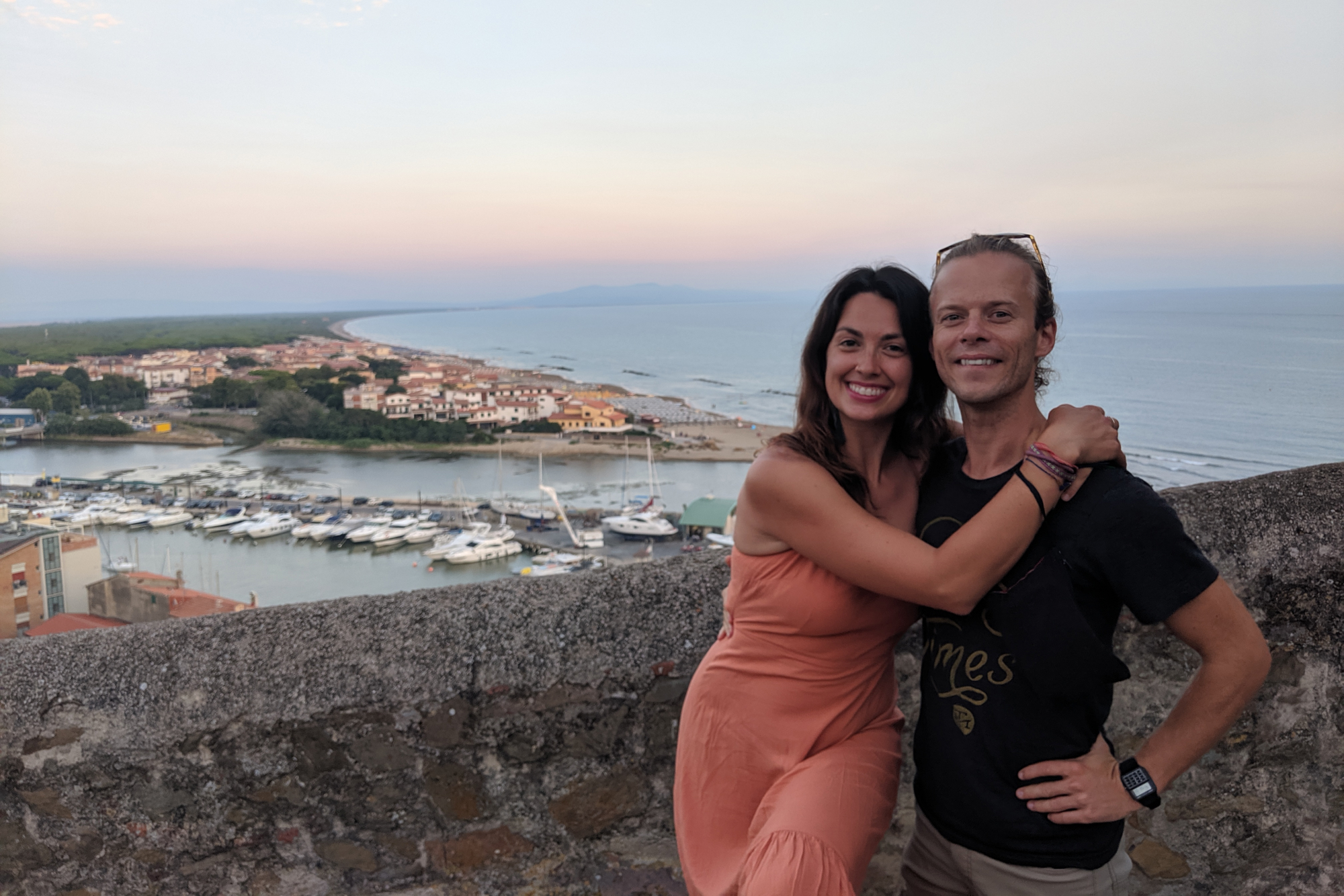 Want to see more of our trip in Italy? Check out this video Dan produced!