Our Thailand Visa was up on April 23rd and our flight to Bali was on May 2nd thus we had 8ish days to kill in another neighboring country. Myanmar was on our list of destinations, however their visa was $60usd each for U.S. Citizens and we wanted more time to explore Myanmar. I guess we’ll add that to the growing list of next destinations. Malaysia, being closer to Bali, was the obvious next destination with cheap flights in and out of Kuala Lumpur.

Malaysia was never on our list which makes this short jaunt more exploratory for future travels. With our fast paced travels throughout SE Asia, we did little to no research on Malaysia which made It fun to go on a whim. The only background knowledge we had was Rachael’s short trip to Kuala Lumpur 9 years ago for an 18 hour layover and that Georgetown was another UNESCO site that was supposed to have fantastic art.

George Town marks the bajillionith UNESCO world heritage site we have visited. Obviously we lost count but we can honestly say we’ve been to more UNESCO sites than we can count on our hands. We were thoroughly surprised with George Town. It’s located in the state of Penang on Pulau Penang (i.e. Island Penang) and is a melting pot of several different Asian cultures and boasts a mixture of colonial and cultural buildings over 100 years old, hence why it is a UNESCO site.

George Town is widely known for it’s street food and street art. These decrepit buildings exhibit some of the most beautiful preservation and art we’ve seen on our trip. The contrast of scraped plaster, rusting beams, red brick walls, and the most intricate graffiti/mural art creates eye candy for the soul. Each piece depicts a story of heritage and culture. We rode bikes throughout George Town following the map that guides you through alleys and main streets to get the full street art experience. 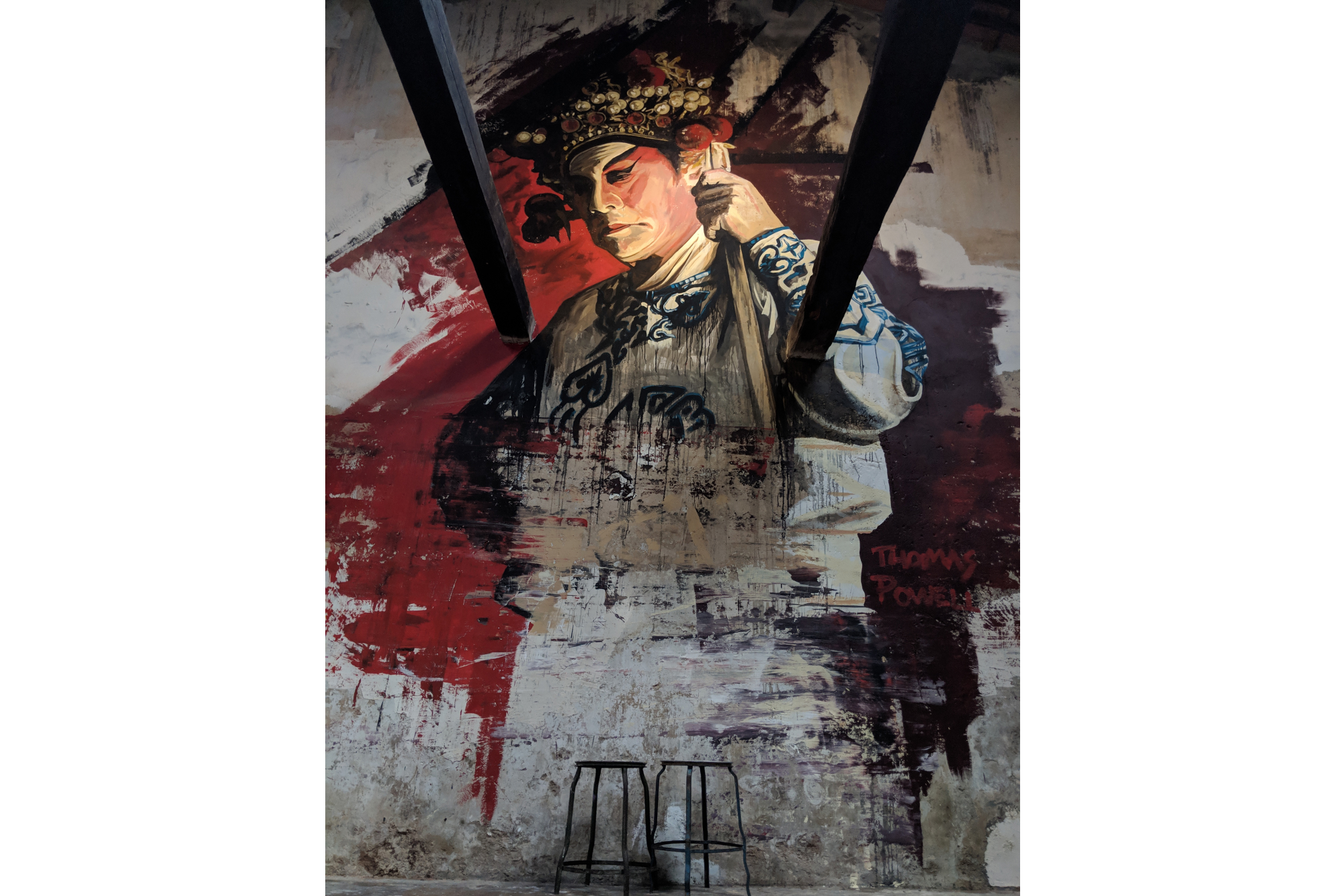 George Town’s food was also a plus, kind of. Majority of the food is fusion where you can walk to Little India and have a Malay-based Indian Curry dish and hop a block over and be in China Town eating delish dumplings and herbal teas. Unfortunately for us, many of the dishes were not vegetarian we were a bit limited until we discovered Yun Shui Ge, which offered vegetarian versions of Malay and Chinese staples. Their laksa (Malay rice noodles with curry sauce) alone was worth the visit. Rachael continues to take Dan’s taste buds on adventures with all the unusual foods she orders. Cendol is one of those. It is a street food desert that involves shredded ice, coconut milk, red beans, weird green jelly noodles, and palm sugar. We can say we did it, but it wouldn’t be our first choice on the menu. 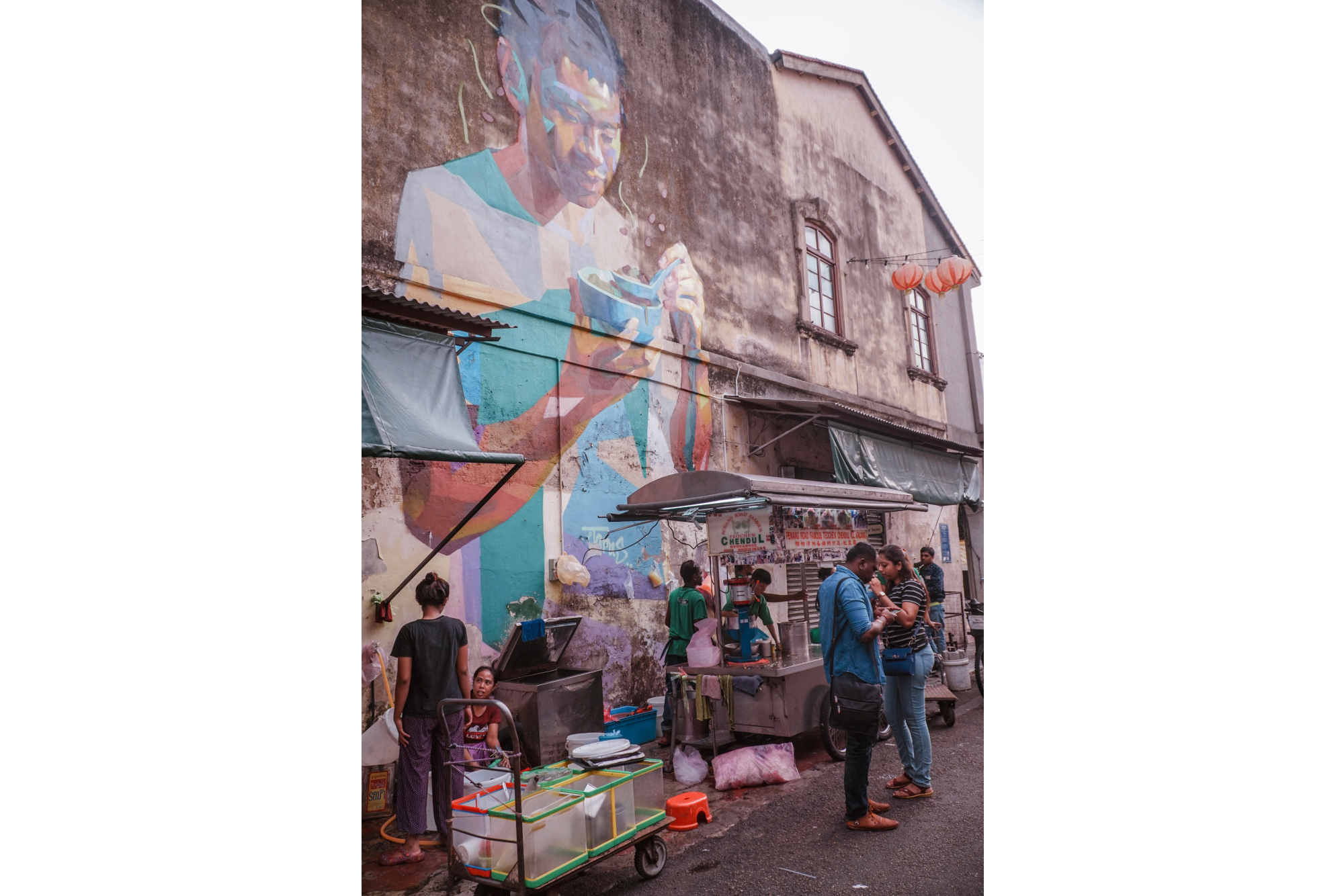 We stayed in the old town, continuing our city explorations, but we did find our nature fix out of the city. We took the hour long local bus ride for less than $1 to Penang National Park and trekked to Monkey Beach for a day where we spotted half a dozen ‘dragons’ ( we later found out they were Asian Monitor Lizards). Although it was sweltering hot and just sitting on a bench would induce us to leave massive sweat stains, the beach was a quiet escape worth the day visit. On the trek back at the end of the day, we ran into a local man under a concrete gazebo serenading some monkeys in the adjacent tree with his ukulele while they ate the jar of black garlic they stole from him.

We didn’t leave enough sweat on the trail so we also decided to hike Penang Hill. A hike that apparently only crazy foreigners do. It was equally, if not hotter that day and we were the only people on the trail due to the funicular that goes from the bottom to the top. It was a funny experience arriving at the top while all the other tourists are taking selfies in their high heels and nice clothes while we could have wrung the sweat out from our shirts. Moving around in this type of heat gives us even more respect for the Muslim women who are covered from head to toe. They are used to it, but it still must be so hot! 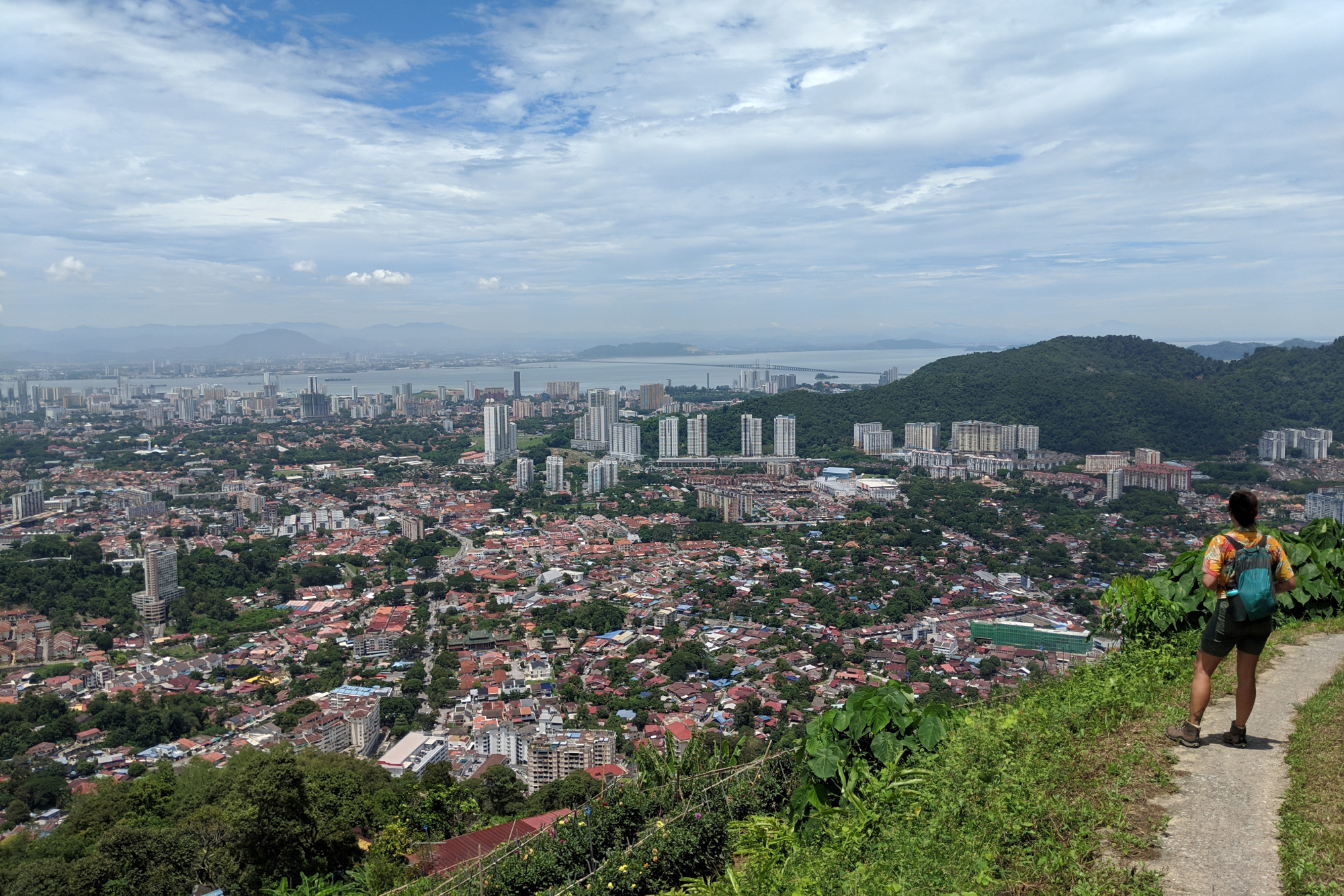 Inevitably, we discovered other places in Malaysia we wish we had the time to go. After meeting locals and other travelers, we quickly learned Borneo was our prime destination. With jungle treks and epic diving, we realized we didn’t have enough time to visit. With only 8 days in Malaysia, and a diminished desire for the speed travel we had been engaging in recently, we spent majority of it in George Town and a few days in Kuala Lumpur.

We planned our time to be short in Kuala Lumpur only because we heard it’s a city of malls. Not our most desirable location setting. When we got on the bus George Town to KL, Dan checked the flight itinerary to Bali, which was booked through Expedia. He quickly found out the flight was cancelled, which was in 3 days. He spent the entire 5 hour bus ride, that night, and the following morning trying to coordinate with Expedia and AirAsia. We originally thought it was the budget airline, AirAsia, that dropped the ball but surprisingly it was Expedia. They took ownership and gave us the original price we were quoted and a $100 hotel voucher, however we had to leave one day later. They were incredibly understanding and helpful in the midst of such a headache.

We purposely booked a hotel with a pool on the roof for the amazing city views. We found an AirBnb with an infinity pool overlooking KL and the Twin Towers. An epic view to say the least. We weren’t the only ones who thought so. Ducking and dodging selfie sticks and group photos added new obstacles when trying to swim from one side of the pool to the other. A prime Instagram spot, apparently. 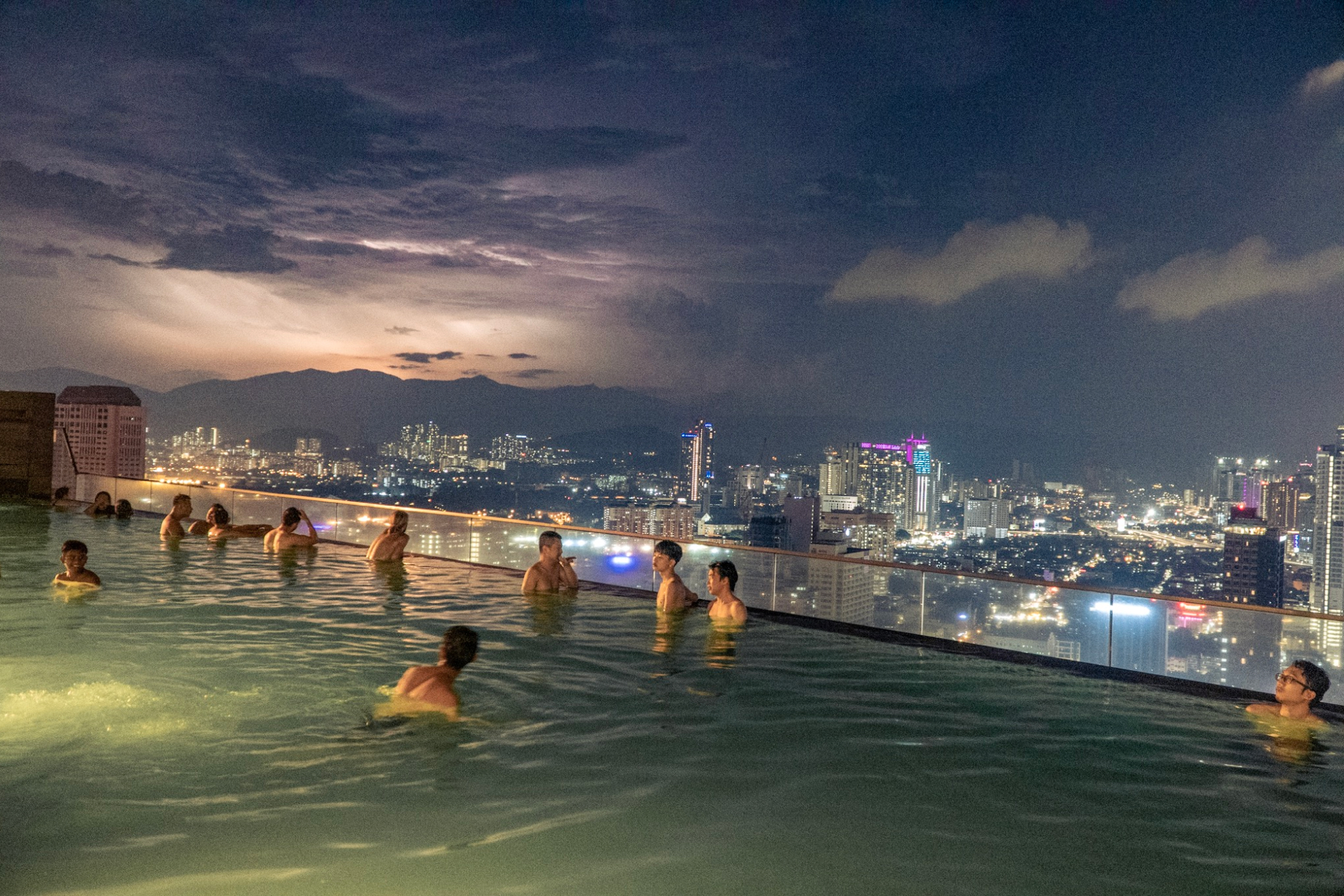 It was no joke that KL is a city of malls. We’ve never been to so many malls in one day, let alone 4 days. They were so giant and impressive, it was easy to get lost in them. Our big mall adventure was going to a D-Box film. It was recommended from a few online blogs. Instead of being a square and just watching a movie in a normal seat, why not have your seat vibrate and tilt with the Avengers? Rach even got the ball rolling when she and a local man collided at the theatre door, knocking his entire drink on the ground. He laughed and declined her offer to buy him another drink and simply stated, “It’s ok. I will be healthier instead.” Just another example of the kindness we experienced from the Malaysian people.

Shakira was another kind hearted person we encountered. At the beginning of our time in Malaysia we looked like lost little puppies at the airport trying to figure out how to get to Georgetown. She came to our rescue as she had just ended her travels and was headed to Penang to visit her family. She gave us the small change we were missing for the bus ride and even offered us food! Serendipitously, she worked for a rock climbing company in KL. We had no idea there was climbing there, so when we were there we followed her lead and headed to the Batu Caves to climb a bit and tour the caves. The climbing was pretty rad with a mixture of limestone and granite walls and tree roots climbing down around the routes. Dan got a lot of lead climb practice in while Rach and her weaker arms got a lot of top rope practice in. 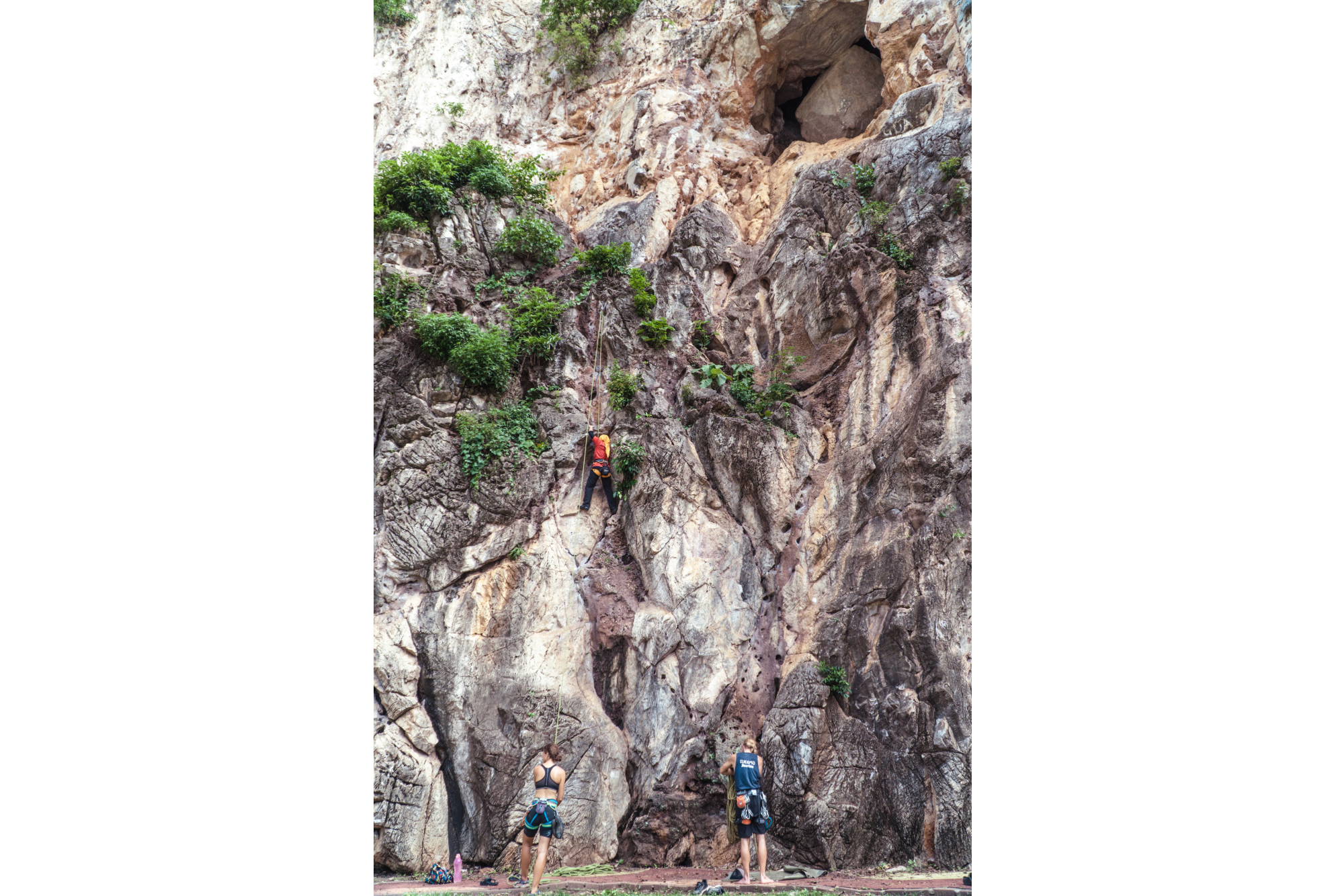 As our time in Malaysia came to an end, we ended up loving it and realized we missed out on a lot to see. We loved the people, the art scene, the food, and the little bits of nature. The malls were a new attraction to us but we were thoroughly impressed with the entertainment they can fit in malls. Not our go to scene, but good for a rainy day…or scorching hot day. It was also a pleasant surprise how many people spoke fluent English. Borneo and Cameron Highlands will definitely be on our list of places to visit in our future Malaysia travels, as well as the fancy resorts with an infinity pool overlooking the forest. While we are plan on the go travelers, we usually have the first leg of the trip planned and some sprinkling of plans within the time we are in a country. It was kind of refreshing to be able to come to a new country with little to no plans. We said ‘see ya later’ to Malaysia while we boarded our flight to Bali, excited to connect with a natural paradise again.

With Love,
-Dan and Rach 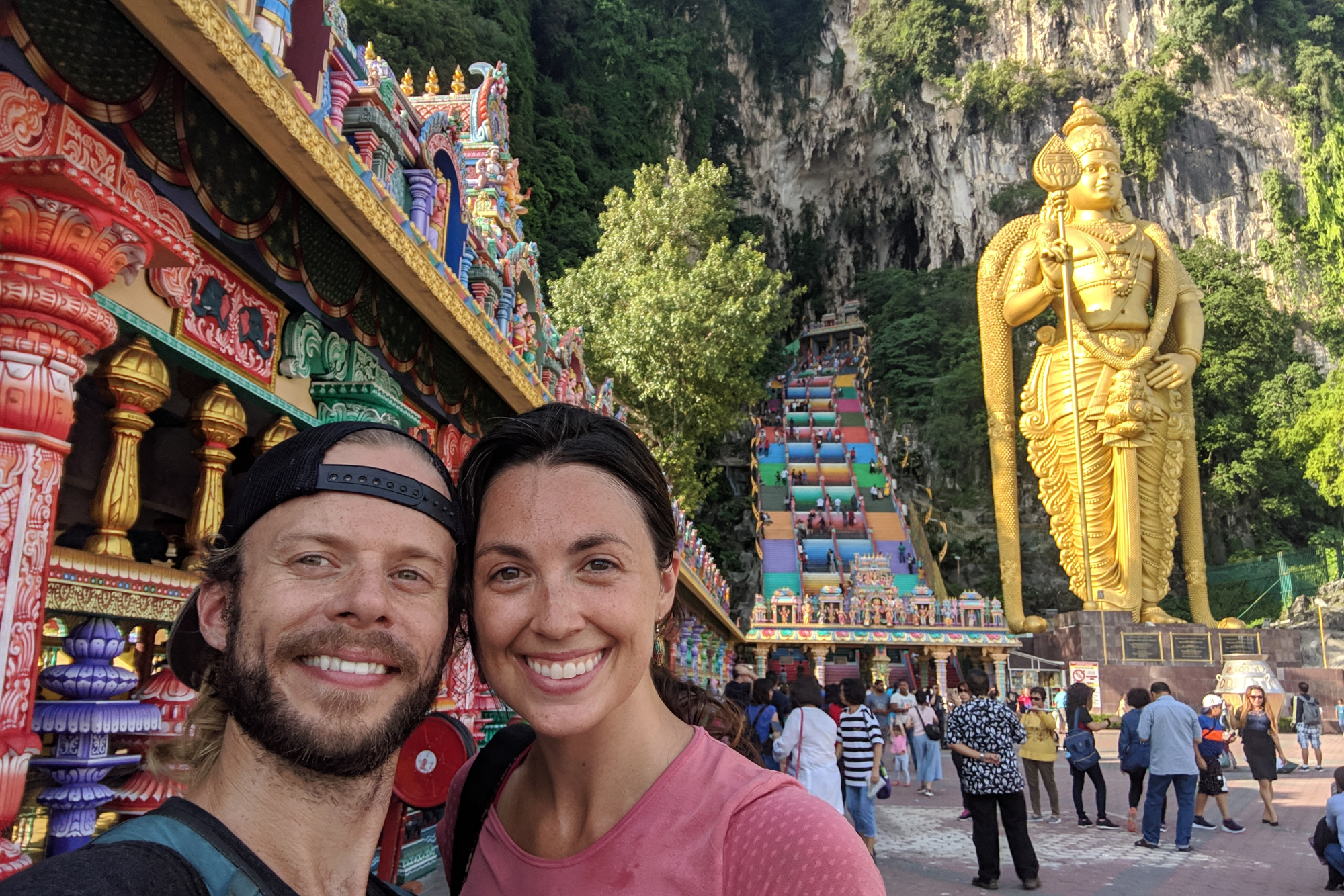 P.S. Curious about the name ‘thorove’? It’s a combination of Henry David Thoreau and rove. Although Thoreau didn’t travel much himself, he expressed the importance of traveling freely and to journey with an open mind. Henry David Thoreau was a coincidental connection we had to Dan’s cousin Joe McClenahan who passed away on May 5th, 2018 from Esophageal Cancer. His life and his passing left a mark on us and changed how we travel. In an old yearbook quote found by his brother Andy, Joe shares a quote from Thoreau, “I wanted to live deep and suck out all the marrow of life…to put to rout all that was not life; and not, when I came to die, discover that I had not lived”.