Originally we were planning on Ton Sai beach in Thailand to spend our holiday month. Luckily, our old college buddy, Robbie, got to us before we booked our flights.

Robbie lives in the middle of the of the ocean. At least that’s what it looks like on Google Maps. Part of the U.S. as a territory and rich with history from WWII, Saipan is a remote island that is part of the Mariana Islands. The major draw to spending the holidays in Saipan was seeing our good college friend and having a homely ‘break’ from on-the-go traveling. The only things we knew for sure of Saipan was that it was Robbie’s home and it was ravaged by typhoons. We later were pleasantly surprised that it also offered tropical beaches, hikes, an active tightly knit community, and was off the beaten traveller trail. We booked our round trip tickets out of Hong Kong to depart the day we flew in from Taiwan. 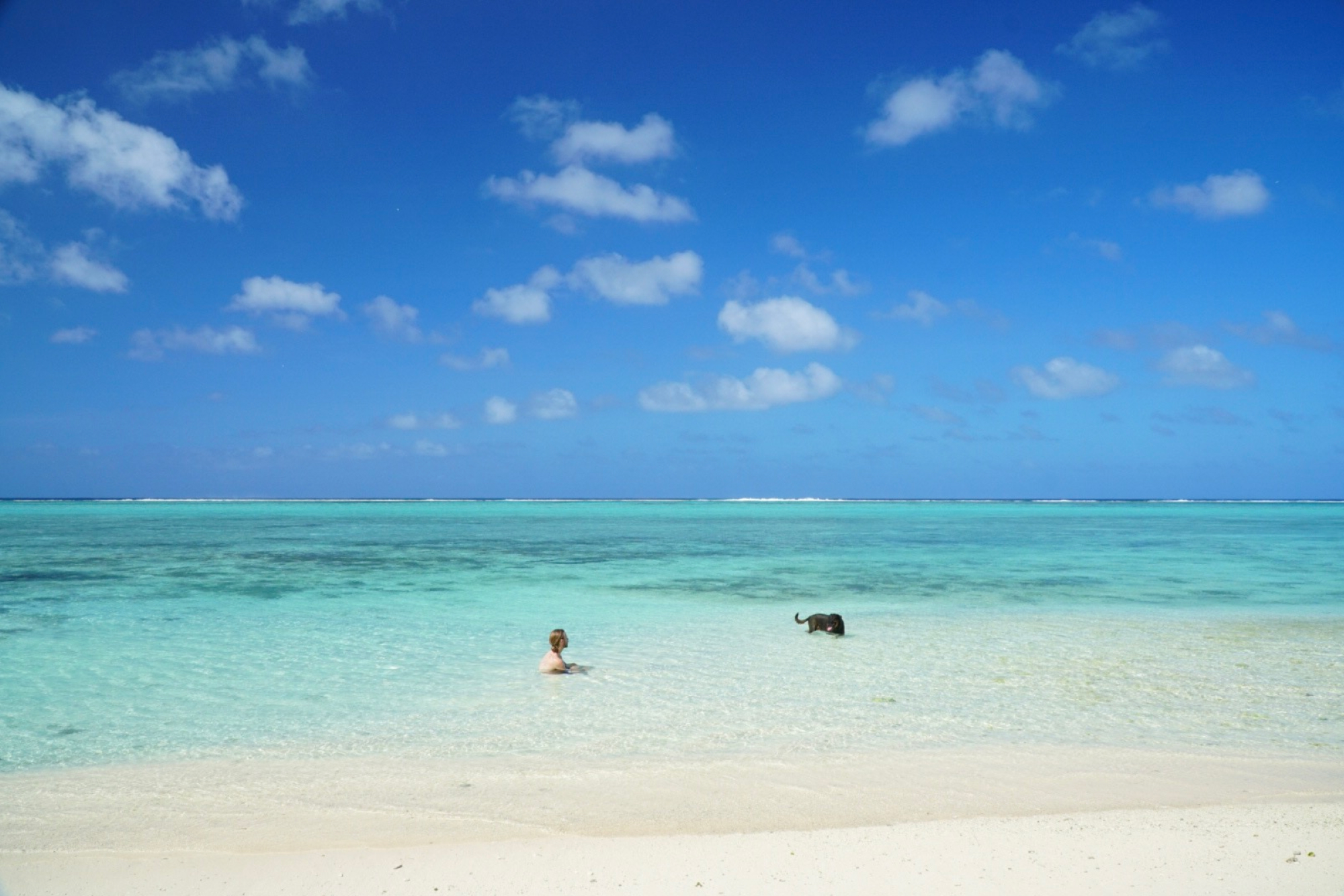 When we arrived, we already had a handful of choices of where we could stay. We knew that we would have a place to stay but, considering we were used to traveling we were expecting a futon in someone’s living room or if we were lucky, a spare bedroom. Since it was the holiday month a lot of local transplants were off island and in need of house sitters or pet sitters. Luckily, we got both! It was perfect because the house came with responsibilities of taking care of wonderful weirdo dog named Watson.

Robbie showed us around the island for the first few days. Actually, it only took an afternoon since the island is 12 miles long. Saipan is a strategic territory for the U.S. Military. During WWII, the U.S. invaded and took over Saipan (known as the Battle of Saipan) as a military base from the Japanese. Signs of destruction, war, heritage sites, and memorials are seen all across the island. We saw WWII bomber planes while scuba diving and snorkeling and visited Japanese memorials on top of ‘Suicide Cliffs’, where the Japanese chose honor instead of P.O.W. as they took their own lives jumping from the cliff’s edge. War history can be difficult to stomach.

A majority of the west side of the island is surrounded by a barrier reef about 2-3 miles off the beach. Robbie works for NOAA as the Liason for the Coral Reef Conservation Program thus his life revolves around preserving these reefs, an important job considering the deteriorating status of the ocean environment! The reef makes a beautiful natural turquoise lagoon off the coast so in some areas you can walk out from the beach close to a mile and still have your head above water. The water trapped in the lagoon was a comfortable wading temperature hovering around 80 degrees. Pau Pau beach was only a 10 minute walk down from where we were staying so it became our routine to snorkel, paddle board, take the dogs out to play, or watch the sunset. Catching the amazing cotton candy sunsets every night, we found ourselves in the water past sundown because it was warmer to be in the water than in the nighttime air. Robbie’s balcony was also a prime spot for sunset sessions and bbq’s. 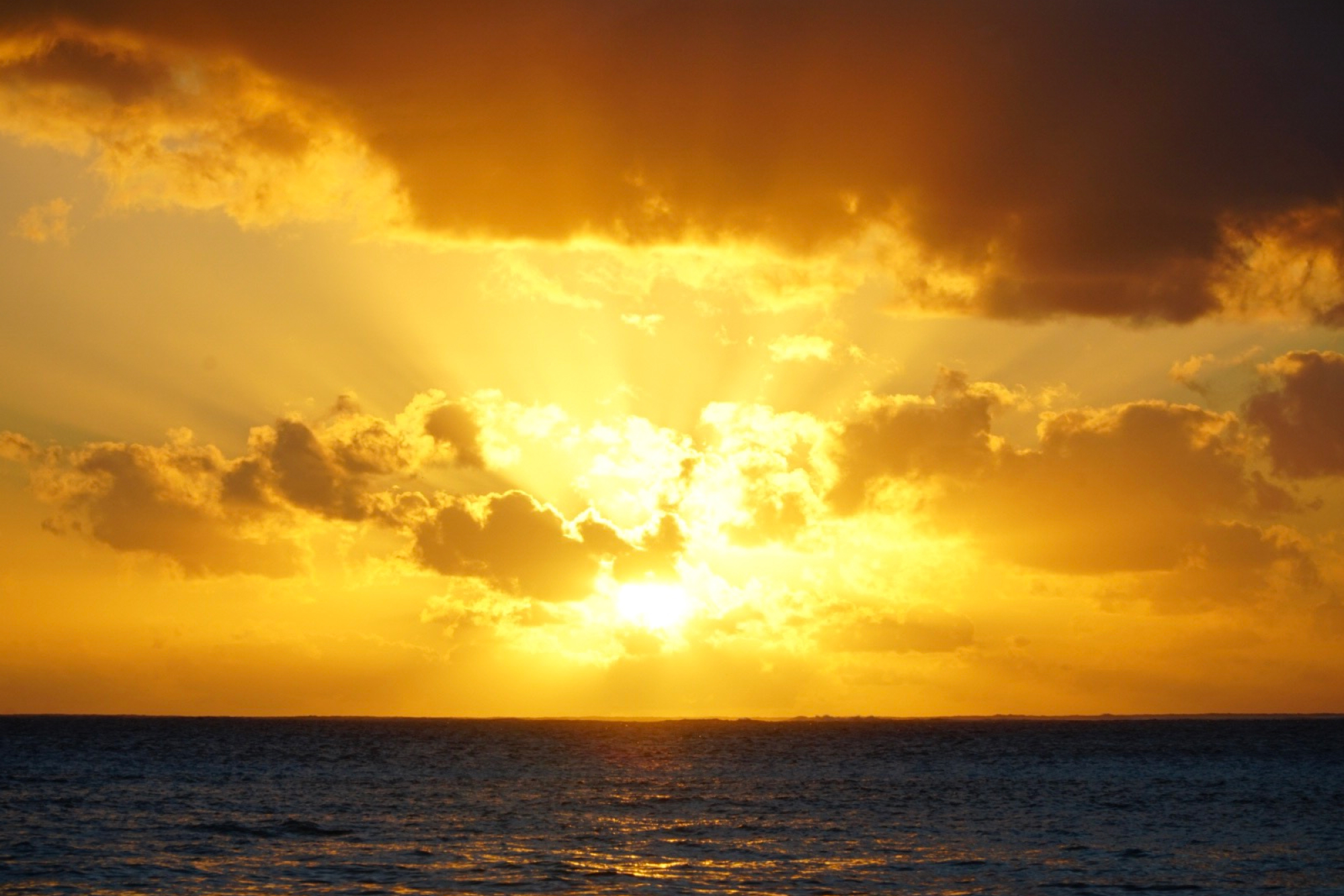 Saipan was hit with a Super Typhoon only months before we arrived. Typhoon Yutu left people’s homes completely destroyed, businesses closed, power outages and water shortages, and psychological trauma in its wake. We were able to see this destruction and rebuilding mostly on the south end of the island. There was one account of a dad wrapping his family between two mattress’ with extension cords to stay safe. We can’t imagine the trauma this could inflict. Robbie (this being his second Super Typhoon he’s lived through on Saipan) was given leave to decompress off island and head to the states for a week over Christmas. This was true for a lot of the transplant residents of Saipan who went off island to visit family for the holidays. Since a lot of people left for the holidays, we spent Christmas alone with just the two of us for the first time…and Watson with his faithful puppy friend LeRoy. Of course we did not forget our own dog, Miles Davis!

As people started trickling back from their holiday break, we bounced from one home to the next, meeting all the housesitting needs. We also met several interesting people along the way. Hearing how people ended up on the island, which jobs led them to Saipan, and the unique way of life showed character in each individual we met. The hodgepodge community welcomed us so warmly immediately! We went to weekly ultimate frisbee on the beach, a hash house harrier full moon run, bbq’s, and open houses. We also learned about the local population and how they consistently had to adapt to outside forces; Japanese, Chinese, Korean, and American. Walking down the main tourist strip, you can catch a glimpse of local kids performing a traditional Japanese dance for the Chinese and Korean tourists.

New Years’ original plan was to spend the night on a local uninhabited island called Managaha. By day, this island is an infestation of Chinese and Korean tourists. By around 4pm, the tour boats take off and the island is next to barron. Unfortunately, that night was supposed to rain and the winds were quite high so we opted for Plan B.

Saipan is owned and governed by locals. If you want to own property, you lease the land and build on top of it. With the major hotel chains, such as Hyatt, they are required to leave their doors open thus no gated hotels and everyone can use their beaches. Plan B was the Hyatt New Years party. The party was a hodgepodge of Chinese, Korean, Bangladeshi, FEMA workers, and the Saipan community we met through Robbie. 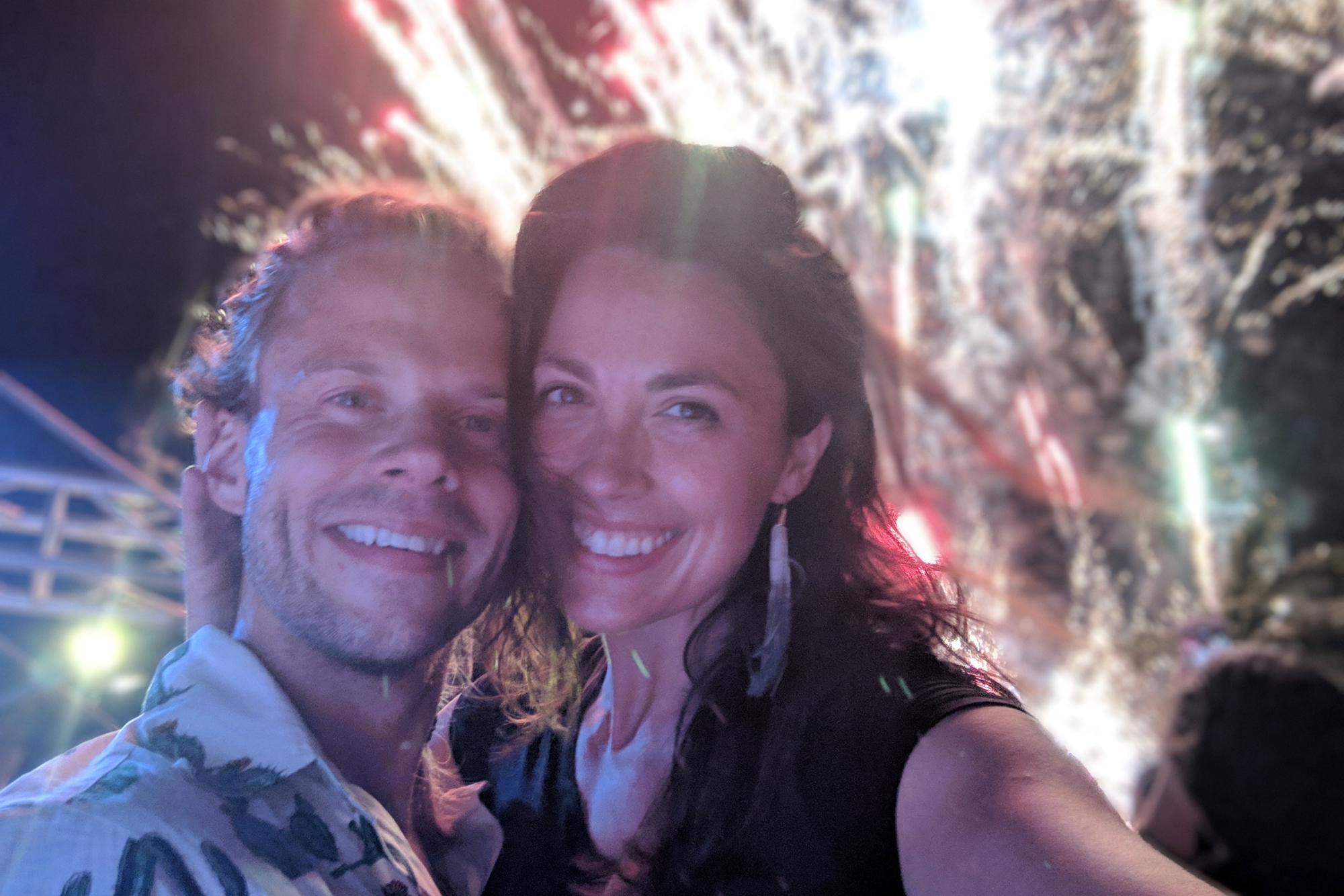 The second day on Saipan, Rachael was invited to a Christmas cookie baking party where she met one of the owners of Saipan Brewery. Just like everyone we met who made their way to settle on Saipan, Jay is a unique man who is not only one of the founders of Saipan Brewery but also a PADI dive instructor. Originally planned to get certified in Thailand, it wasn’t hard to convince us to join him to get our dive certification while we were in Saipan.

While Jay was off island attending a traditional wedding in Nepal, we were studying for our PADI Open Dive Certification. When he returned, we were ready for the practical lessons. We were very fortunate to have found Jay and Ocean+ Dive Center. The center primarily caters to Chinese and Korean tourists thus it was just the two of us and Jay in our dive certification class. Our class included pool scuba lessons, shore dive lessons, boat dive lessons, and an open cave dive lesson. We dove WWII wreckage that included memorial sites underwater, the Grotto (open cave dive), and coral reefs. It was by far the best intro to the world of diving we could have asked for! We swam through the waters at 40-60ft, sometimes seeming to move in slow motion as we watched octopus, sea turtles, angel fish, clown fish, blowfish, and even a blacktip reef shark.

As for us diving noobs, at first glance, Saipan’s coral reefs are stunning! However, after learning about coral reefs and the human impact on reefs, we learned these reefs are dying. The beaches are covered with washed up ‘bleached’ coral pieces. Beautiful in it’s own way but a sign of an endangered symbiotic species. When reefs bleach, they are expelling algae from their living tissue causing the coral to turn completely white. Coral does this due to temperature changes in the water. Although the water temperature is only increasing by a few degrees, it’s enough to cause the bleaching effect. Similar to human biology, it’s only a few degrees difference in body temperature to go from healthy to sick. It’s normal on a small scale but an anomaly on a large scale and there have been too many anomalies regarding coral reef bleaching. Robbie and several of his marine biologist friends whose job is coral reef preservation explain the only plausible explanation for the high levels of bleaching is global warming. At the rate the reefs are bleaching, biologists are looking more into reef regrowth opposed to reef conservation. Check out Chasing Coral for a beautifully well done documentary. 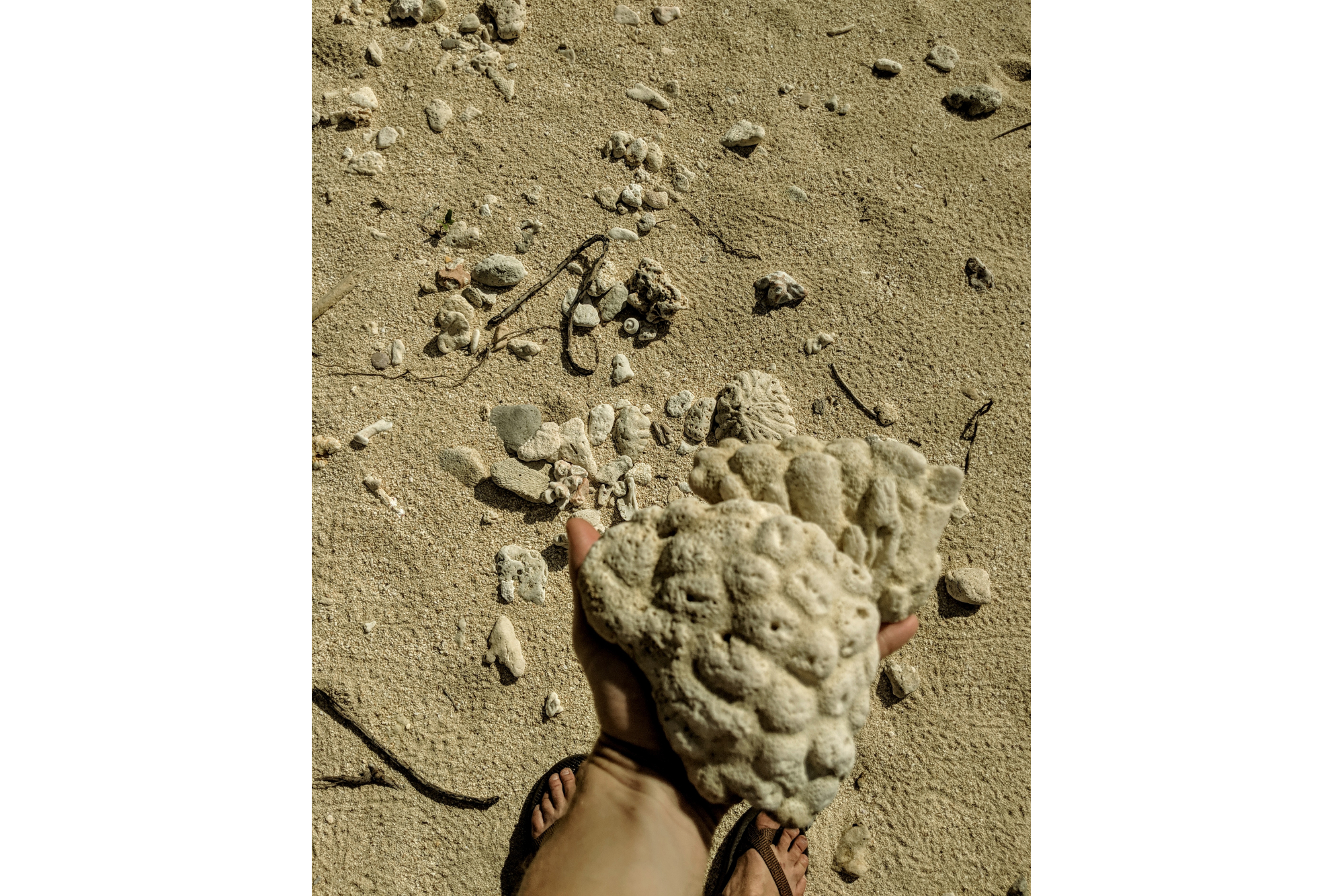 We spent a little less than a month in Saipan. It was a refreshing break from hotels, homestays, and hostels. We felt instantly integrated into the community that it felt like home. Travel has a way of teaching you things you once forgot or lighting the way to new discoveries. Spending as much time as we did here made us realize how much we enjoy having a comfortable home base, dogs, a strong community of friends living an active lifestyle. Then we realized the irony of our desire to travel; however, the draw of travel continues to outweigh our homebody tendencies.

As we said goodbye to Saipan, we said Hafa Adai to Vietnam. Returning to the vagabond lifestyle, we were sad but excited for the next leg of our journey in SE Asia.

Love you all,
-Dan and Rachael 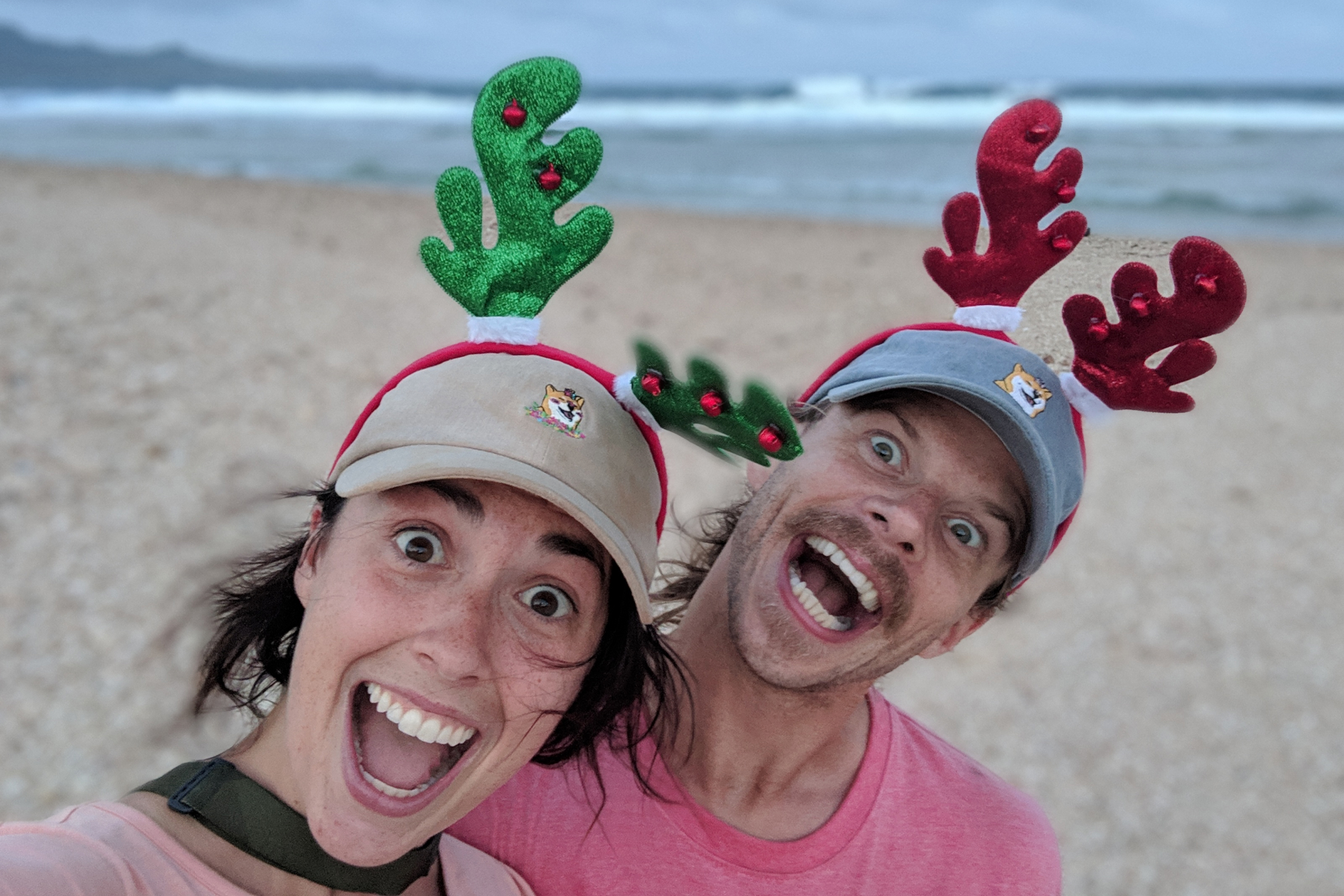